Meet the Team of Parkside Animal Hospital in Fishers! We’re pleased to provide exceptional vet care for your pets! 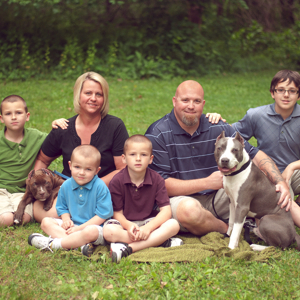 Cheri began working at Parkside in May of 2003. She received her Bachelor’s Degree in Elementary Education at St. Josephs College. After a brief career in teaching, she attended Purdue University and achieved her degree in Veterinary Technology. She has worked in the veterinary field since 1986. She resides in Greenwood with her husband, Erik and their four boys, Declan, Joseph, Brayden and Noah. They have two Pill Bull Terriers, named Mojo and Kojak. They enjoy camping, sports, and taking their dogs to the park. 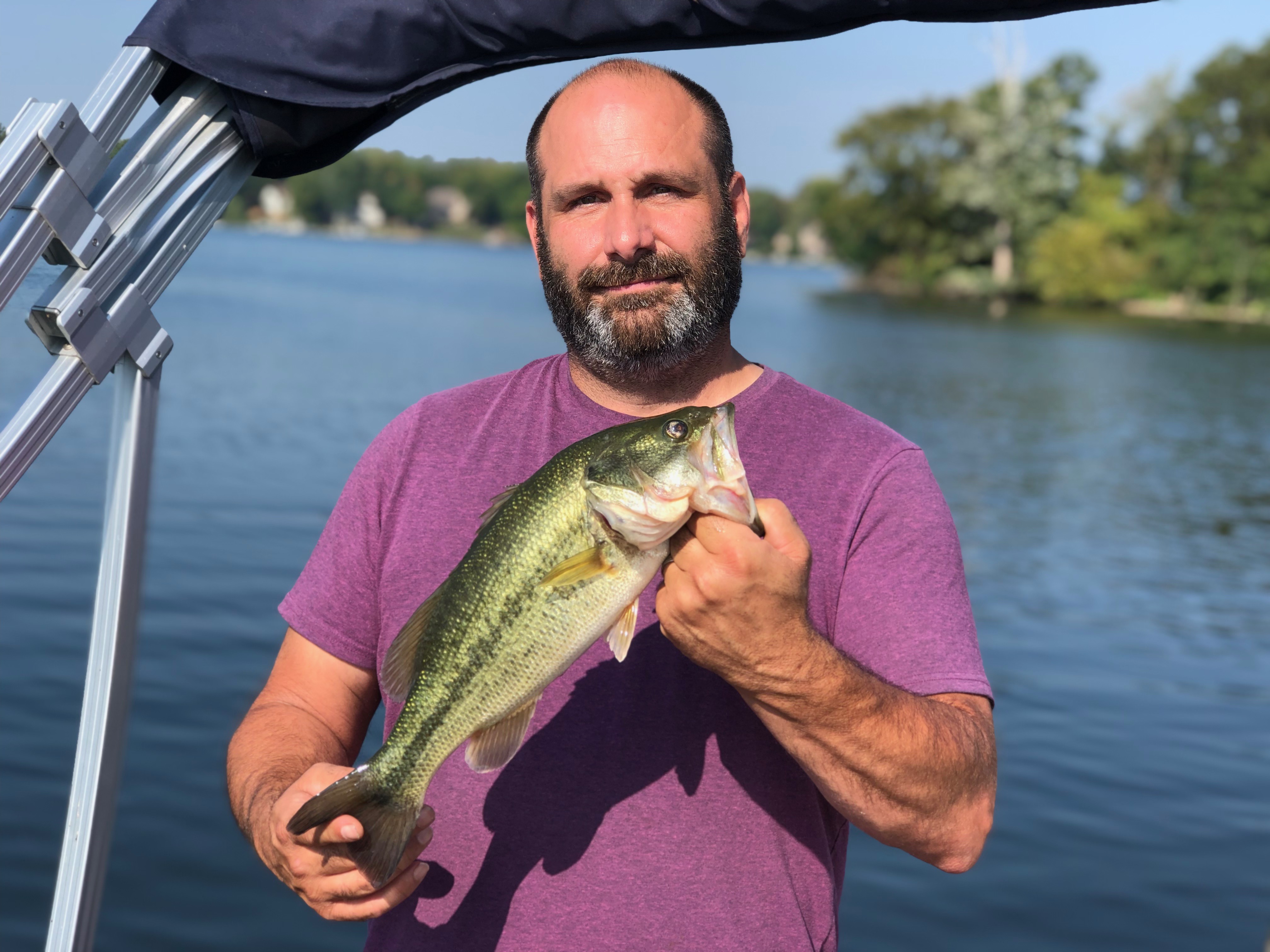 John has worked as a veterinary technician since 2002 and started his career in veterinary emergency medicine. He joined the team at Parkside in July of 2005. John resides in Indianapolis with his wife Michele, and his two dogs, Jake and Mocha. John’s interests include camping, hunting, fishing and general outdoor activities. 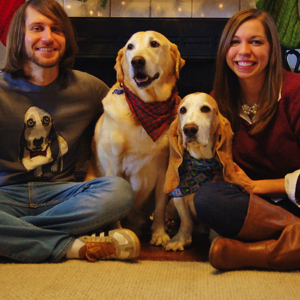 Jenny joined the Parkside staff in April of 2009, but has worked in the veterinary field since 2001. Jenny received her Bachelor’s degree in Animal Science from Purdue University. She also graduated Valedictorian in Veterinary Technology at Harrison College. She shares her life with her boyfriend, Tim, and their two dogs, Logan and Franky. In her free time, Jenny likes to cook and bake, visit with friends and family, and venture out of the “Fishers bubble” to watch Tim play guitar and sing. 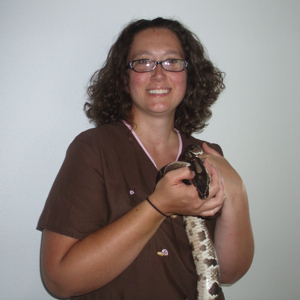 Andrea joined Parkside in June of 2013 after moving to Indiana from Maryland. Although she spent much of her life on the East Coast, she was born and raised in the Chicago area. She started out as a veterinary assistant while studying animal science at the University of Maryland Eastern Shore, and has now been working in the veterinary field for 16 years. Andrea resides in Noblesville with her husband Bill, her daughter Bridget, two lazy cats, Marshmallow and Pebbles, one gimpy legged pit bull named Harpo and one completely snazzy ball python named Tola. She loves spending lots of quality time with her family, whether it’s camping, hiking, traveling or just spending a day playing games. When she’s not working or playing, Andrea spends her time volunteering with the Rural Area Veterinary Services, which provides no cost veterinary services to underserved areas in the United States and abroad. 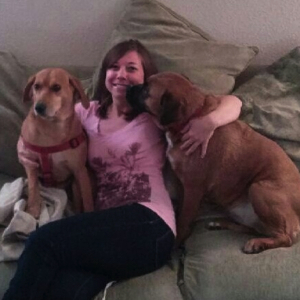 Adriane joined the Parkside staff in February of 2013. She has been an animal lover since she was little. Her Great Aunt, who was a VP of a local animal shelter, would take her to pet stores on the weekends to try to adopt out pets. She loves all animals big and small and still helps spiders out of the house and tries to save worms on the sidewalk. Her dream in life is to open an animal sanctuary. She decided to make her passion a career and graduated from the Vet Tech Institute in 2010 and passed her boards the same year. She lives in Noblesville with her husband Jason, their two dogs, Pete and Ava and their new baby, Jackson, who was born in December! 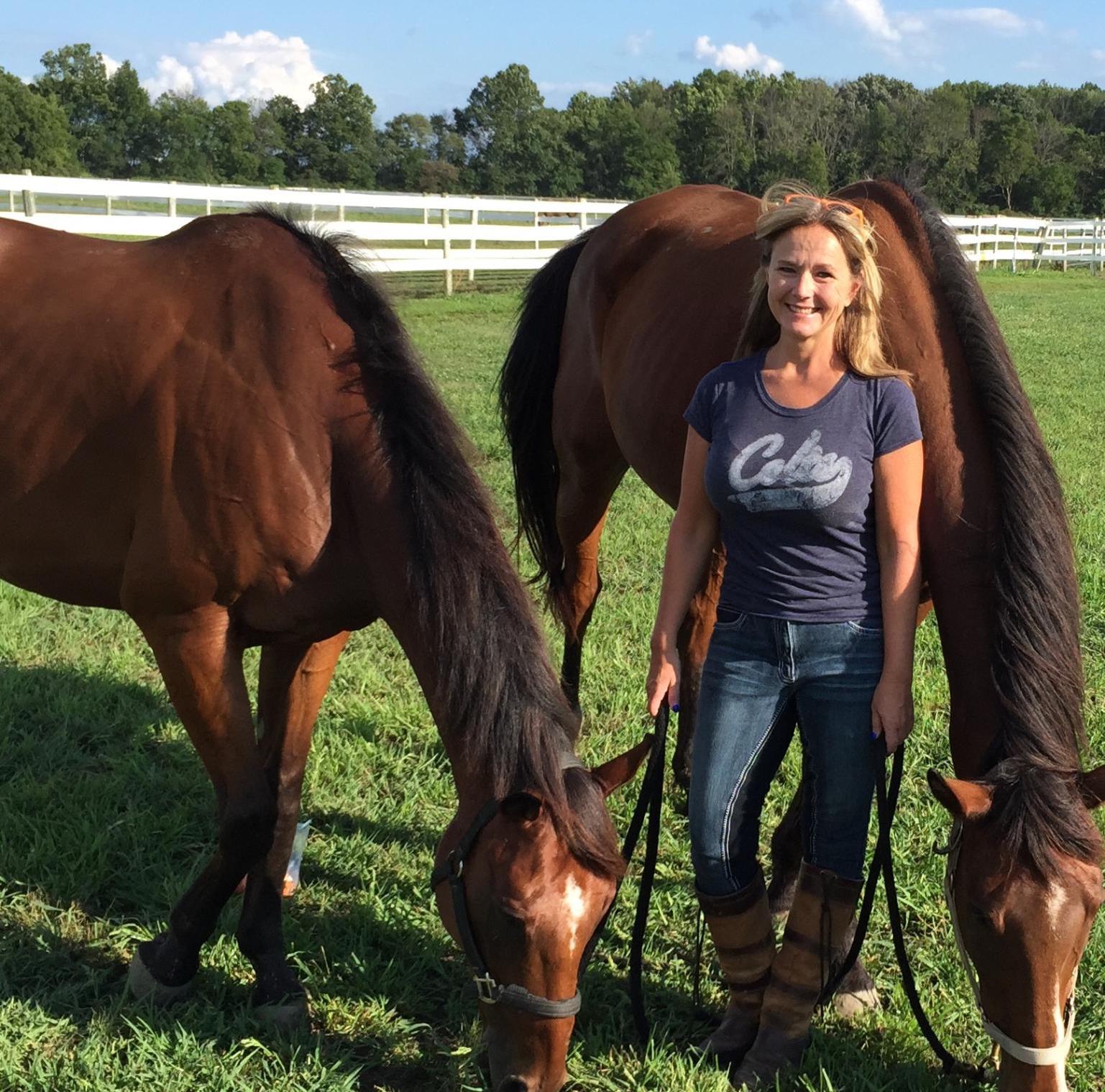 Maria joined the Parkside team in October of 2014 in order to complete her externship for The Vet Tech Institute. Because of her love and passion for animals, Maria decided to change her career path and left the insurance industry after 25 years. She received her Associates degree in Animal Science in December 2014 and at the same time became a permanent part of the Parkside family. Maria has been happily married to her husband, Gavin, since 1996 and has two amazing kids, son Michael and daughter Alex. She has two horses named Bear and Bentley and loves riding in her spare time. She also has two Yorkies, Grace and Cassie who are always by her side. Maria decided that four animals were not enough for her which is why she loves coming to work everyday! She enjoys spending her day loving on all of our client’s four-legged children! 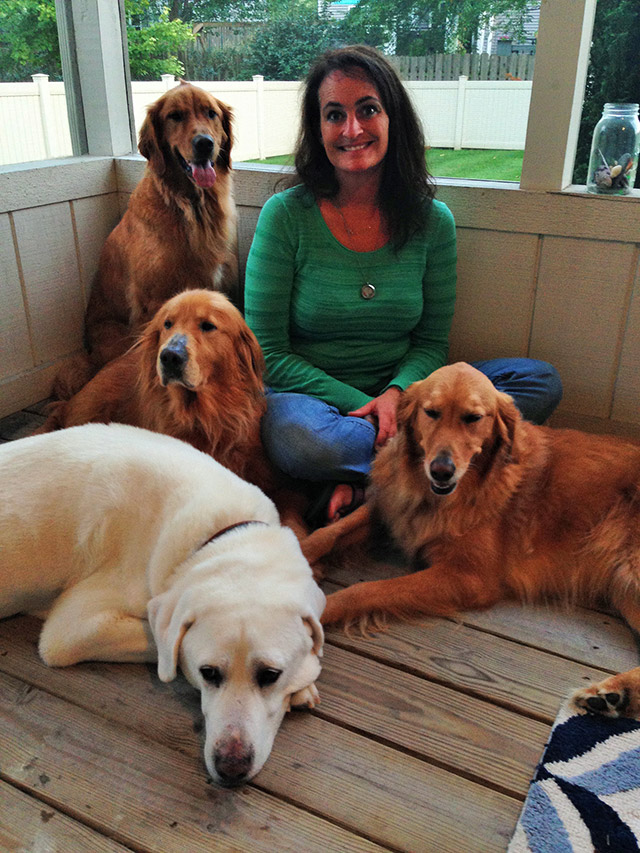 Jessica joined the Parkside team in Jan 2015 after moving to Fishers, IN from North Dakota. She earned her degree in Animal Science from National American University in Rapid City, SD in 1999 and has been in the veterinary field ever since. Jessica is active in several Golden Retriever rescues, serving in multiple capacities within each group spanning multiple states. She has a strong passion for volunteerism, rescuing and re-homing her foster dogs, and values the importance of the human-animal bond! Jessica shares her life with her husband of 20 plus years, their two sons, three resident rescue dogs, a cat, a one current foster dog. As a family, they enjoy outdoor activities such as camping, hiking, sitting around the fire pit, and Hockey! 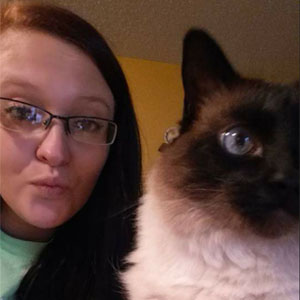 Jacqui joined the staff of Parkside Animal Hospital in March of 2016. She graduated from International Business College in May 2015 for Veterinary Technology. She has always had a love for animals and the veterinary field. She currently lives at home in Greenfield, Indiana with her boyfriend, dog (Montana Blue), cat (Esme), and frog (Meatball #2). In her spare time, she enjoys painting and drawing and also cheering on her boyfriend with their car audio team. 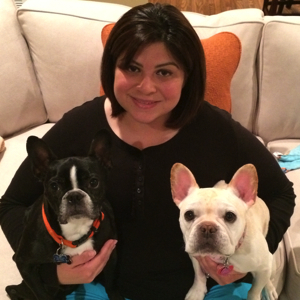 Christina joined the Parkside staff in January of 2014 and rejoined us back in November of 2016. She is originally from California, but came to us via Las Vegas. She loves French Bulldogs. She lives in Avon with her husband Andrew, their two dogs, Bam (French Bulldog/Boston Terrier mix) and Brie (French Bulldog) and their their box turtle Midori. 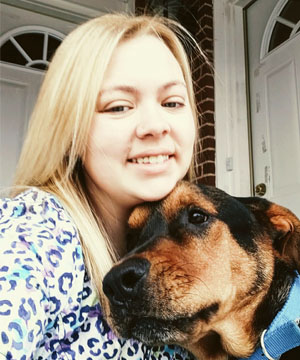 Jenna joined the Parkside team in December of 2017. She has been working in the field of veterinary medicine for almost three years. She started out working with animals at PetSuites, a local kennel, while pursuing her associates degree in criminal justice. She originally thought that being an animal control officer or a K9 officer is where her career would take her but she soon realized that helping animals was her true passion. She has been married to Sam since May of 2012 and they have a wonderful little boy named Kellen (4), who is following in Jenna’s footsteps with his love of animals, especially sea critters. Jenna has 4 dogs, Lincoln a Labrador, Chloe and Piper, both miniature dachshunds and Rex, a mixed breed. She also has two cats, Loki and Thor. Outside of work, Jenna enjoys time outdoors, spending time with family, cookouts, camping, fishing, game nights and country music. 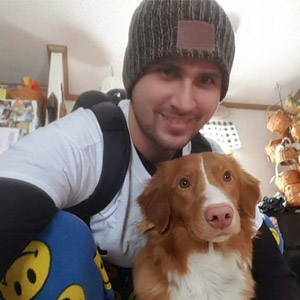 Ian joined the Parkside family in November of 2015. He plans on attending Harrison College in the near future to pursue his degree in Veterinary Technology. Ian has a Nova Scotia Duck Tolling Retriever named Loki. In his spare time he enjoys fishing, bowling, and attending dog events such as dock diving, disc throwing, agility and barn hunts. 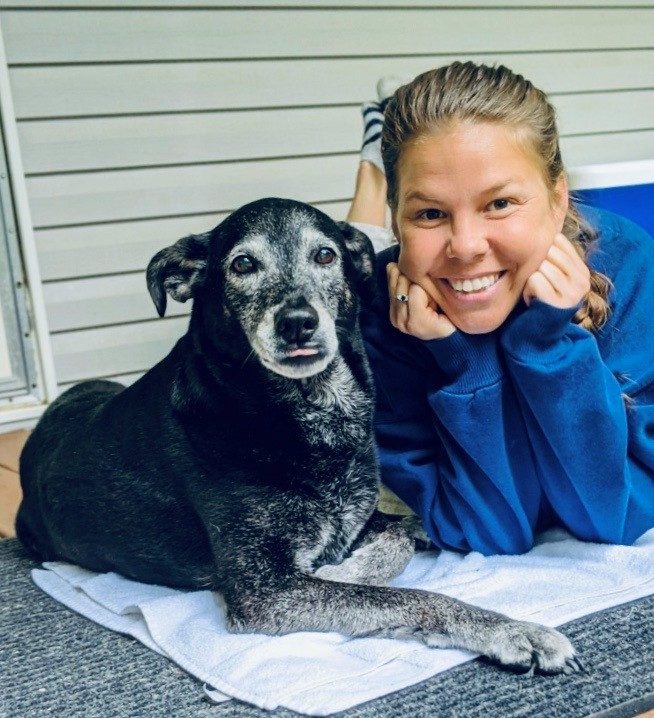 Hi everyone!! My name is Adara Schauman. I’m originally from Evansville, IN where I grew up in an animal-loving family. I graduated from Purdue University with a degree in Animal Science & Veterinary Technology. When I moved to Indianapolis I went into speciality medicine, ophthalmology, for about 6 years. Now I’m at Parkside! I’m very passionate about animals, especially my family dog Addie. Addie is the best dog in all the land! My favorite breed are Labrador Retrievers!

I also enjoy all sports and hanging out with my friends and family especially during the summer time! 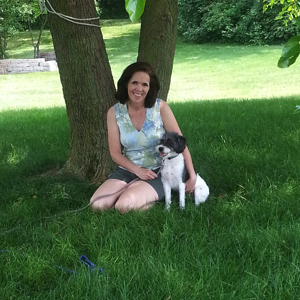 Laura joined Parkside in early 2009. She grew up in Westchester County, New York and has a degree from Mt. San Jacinto College. While studying, she managed a stable that trained horses for showing and hunting. She then coordinated the move of the horse farm to San Diego where she later enlisted in the Air Force and was stationed in Tampa, Florida. During her four years in service, she met her husband, Dave, and moved with him to Indiana where they had three children. Her love for both small and large animals brought her to Parkside where she gets to do what she loves, help animals.

Jenn joined the Parkside family in September of 2015. Prior to coming to Parkside, she worked as a receptionist at another animal hospital in Fishers and has a strong background in customer service. She is an animal lover who prides herself on building long lasting relationships with clients. When not working, Jenn enjoys photography, live music, reading and doing fun things around town with her 3 kids! She has one dog, a four pound Chihuahua names Porkchop, who has quite a reputation around the office.

Stephanie joined our staff in April of 2017. She graduated from Westfield High School in 2011 and went to cosmetology school in 2013. After graduating and working at a salon for awhile, she realized that wasn’t the career for her. She knew she always wanted to work around animals and felt lucky when she found her job with us at Parkside. She feels like it the is best place she has ever worked! In her free time she enjoys hanging out with friends and family, going to country music concerts and attending festivals in the Indianapolis area. She also enjoys hanging around the house with her cat, Tiger!

Mindy began working at Parkside in August of 2017. She is originally from Orleans, Indiana. She is a 1997 graduate of Johnson University in Knoxville, Tennessee with a B.S. in Bible/Counseling. Mindy has worked as a secretary/receptionist/administrative assistant the past ten years. Mindy has a daughter, Emily, who was born in 2001. In June of 2017, Mindy married Bryan, who has three teenage daughters, Ariel, Rebekah and Rachael. She lives in Tipton with her family and Sally, her Shih Tzu. Mindy loves coming to work each day and thoroughly enjoys all of the people and fur babies. In her spare time she loves spending time with family, watching Emily’s choir and theater performances, listening to a wide variety of music, cooking, catching up on her favorite shows and napping with Sally. 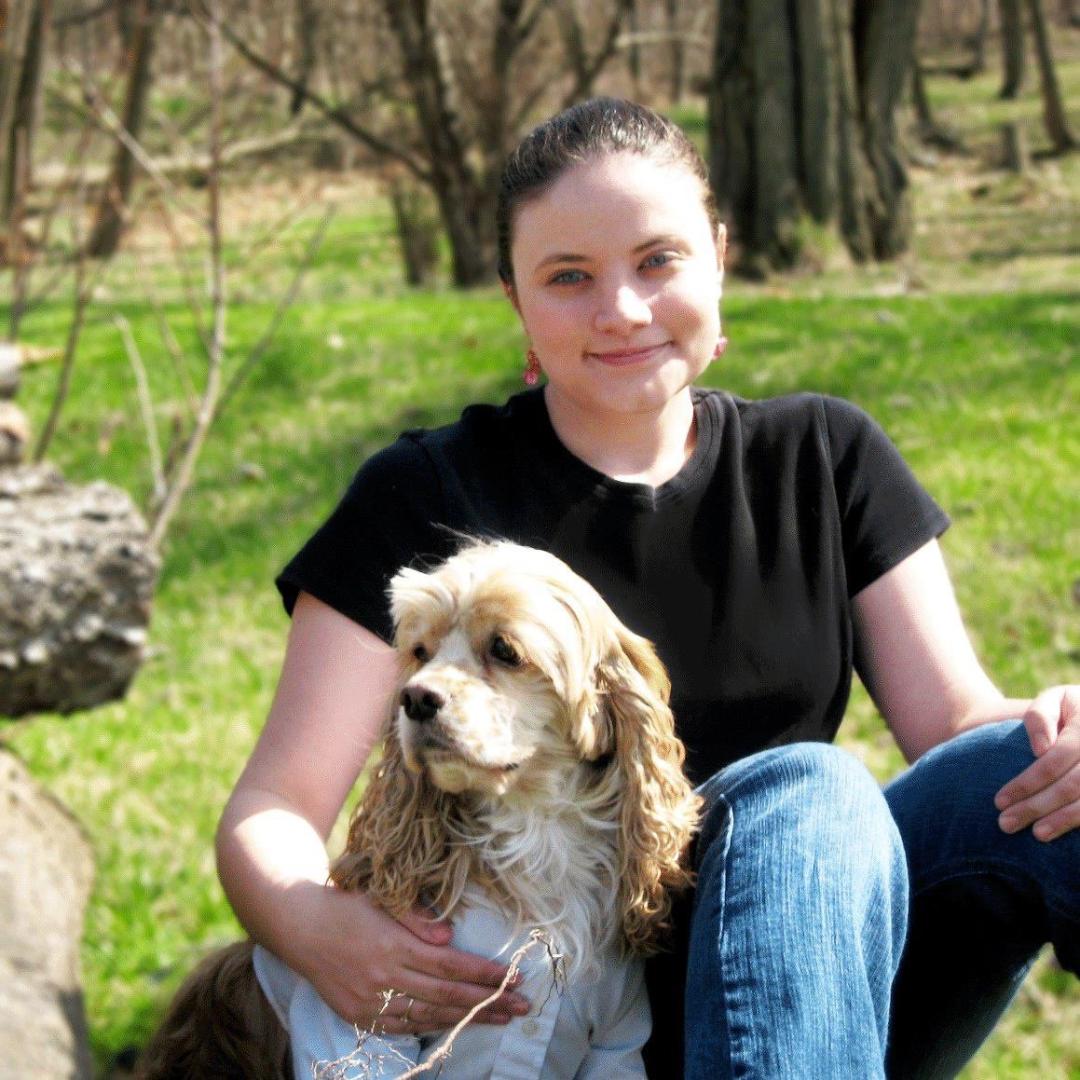 Stephanie joined Parkside in July 2018, a graduate of Noblesville High School and The international Business College, she came to us with 7 years of animal care experience and 10 years of customer service experience. She has a Medium haired calico cat named Ellie and a Cocker Spaniel named Max. When she’s not working you can find Stephanie spending time with her 3 nieces and 3 nephews. She also enjoys spending time outdoors, reading, and game nights with her family. 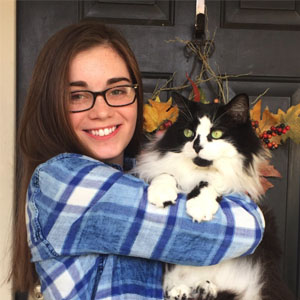 Madison became a part of the Parkside crew in May of 2016 after participating in a project for her Veterinary Assisting course at the J. Everett Light Career Center during her senior year of high school. She then began taking college courses at Ivy Tech with a plan to transfer to IUPUI to pursue a career in Veterinary Technology. Not only is she passionate about animals, but she also has an affinity for the arts. With IUPUI still in mind, Madison has since changed her major to Media Arts to become a professional artist. Outside of the hospital, Madison enjoys drawing, reading books and comics, spending time with her friends and annoying her two cats, Harley and Heavenly. Even though her goals have changed since graduating from high school, Madison still loves being a veterinary assistant and helping both the technicians and animals of Parkside! 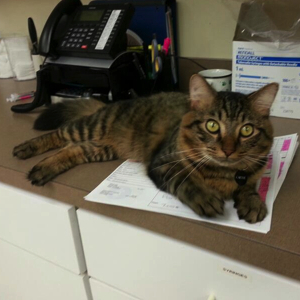 Carter joined the staff at Parkside in the Spring of 2013. He came to us for treatment from the Hamilton County Humane Society as a stray. He spent many weeks with us after his initial treatment and subsequent surgery. All of the staff members fell in love with him, and it was decided that he had to stay and be a part of the team! Carter primarily spends his days in the treatment area with the technicians. He enjoys lounging in various areas, playing with his many toys, stealing coffee stir sticks and providing us with affection on days we need it!